Teleconference about the memorandum of cooperation 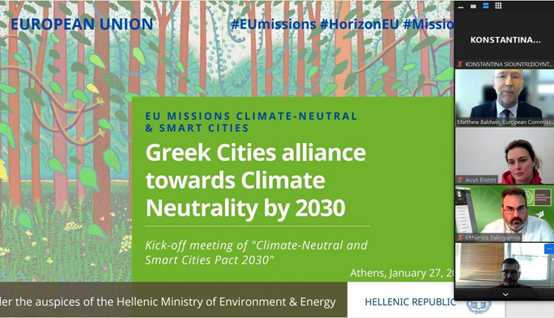 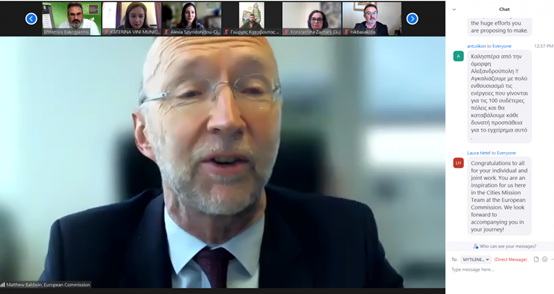 HomeCLIMATE NEUTRAL CITY, Press ReleaseTeleconference about the memorandum of cooperation

The event was also attended by representatives of the General Secretariat of the European Mission for Climate Neutral and Smart Cities and outgoing members of the Mission Board, such as Mr. Chrysses Nicolaides.

The aim of this Climate-Neutral & Smart Cities Pact (‘Cities Pact’) is to speed up the Cities’ transition to climate-neutrality and digital transformation by 2030 within the framework of the European Mission on ‘Climate-Neutral and Smart Cities’ and at the same time to contribute to the recovery of the Cities’ economy in the wake of the COVID-19 pandemic.

The main areas of cooperation are ον the following sections:

The Deputy- Director Matthew Baldwin emphasized the importance of the Mission

Matthew Baldwin is a European Commission official: he is Deputy Director-General of DG MOVE where he has been since July 2016.  Amongst his principal professional activities, he is Manager of the Commission’s Mission for 100 Climate Neutral Cities by 2030; he is the EU Coordinator for road safety and sustainable urban mobility; and he is also managing the Commission’s crisis network of COVID-19 transport contact points.

Mr. Matthew Baldwin welcomed the action of the of twenty-one (21) Greek Municipalities to participate in the process of selecting the 100 climate neutral poles by 2030 and stressed that this Memorandum of Cooperation of Greek cities is an example for the other EU Member States. which should adopt this particularly important initiative.

The Secretary General Spatial Planning and Urban Environment of YPEN, Mr. Efthymios Bakoyannis, pointed out that Ministry of Environment and Energy, throughout the last 2 years, is working on the preparation of the Greek participations in collaboration with Mr. Chrysses Nicolaides and Maria Vasilakou, former members of the Mission Board. In addition, he emphasized to the fact that the Greek cities have special characteristics, which make them particularly important for the collection of data from the southeastern Mediterranean that will contribute to the goal of climate neutrality throughout Europe by 2050, through the Green Agreement.